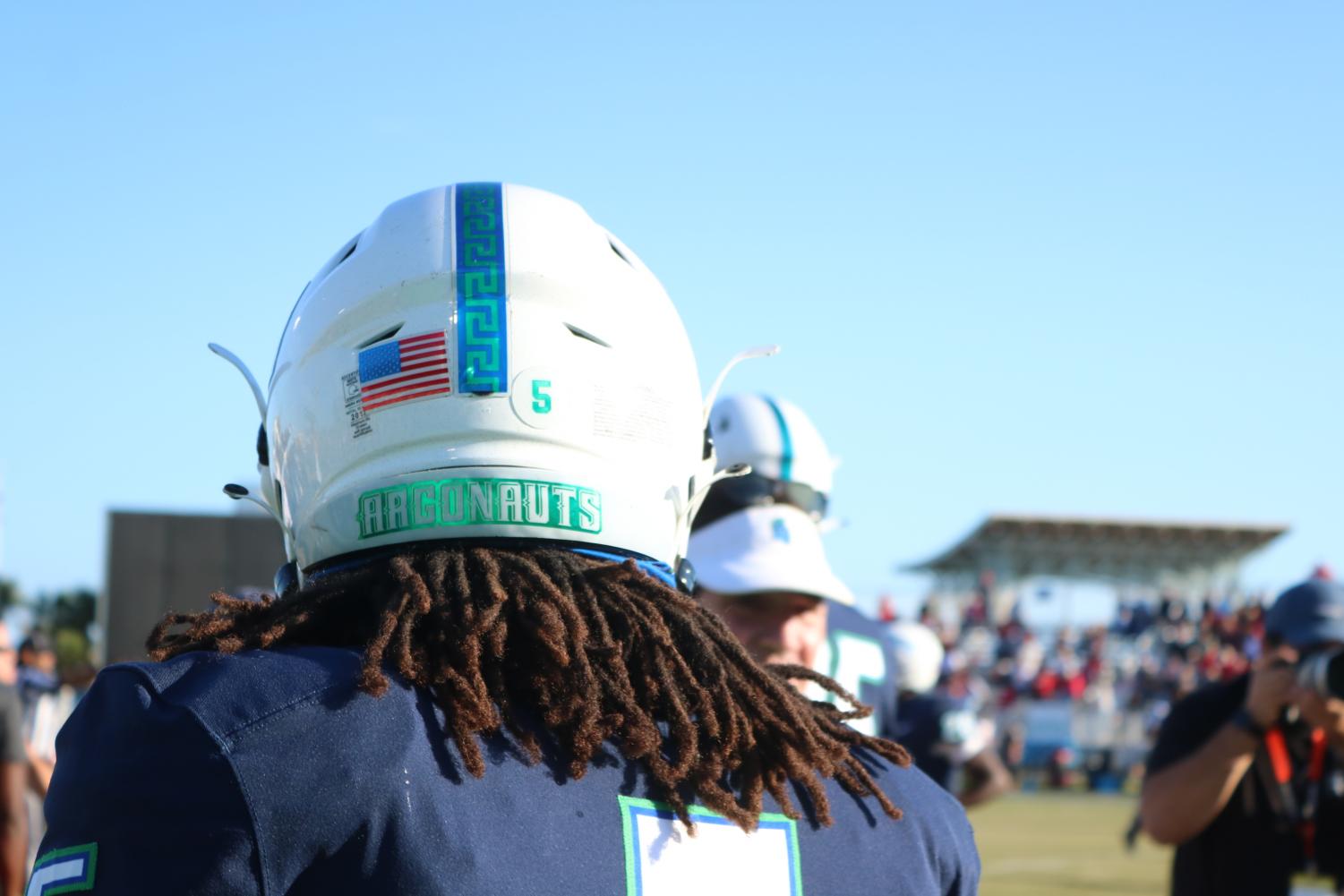 The Argo Nation gathered at the Blue Wahoos Stadium to cheer on our UWF Argonaut Football team (9-2) in the first round of playoffs of the NCAA Division 2 championship tournament Nov. 20. 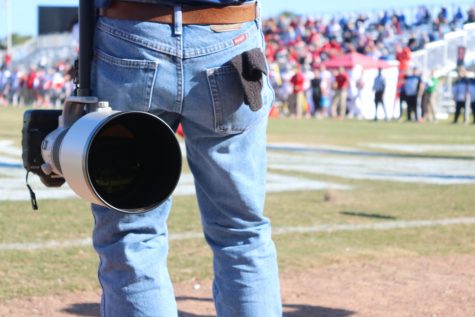 This was the first playoff football game hosted on home turf in UWF history. The Argos faced off against the Newberry College Wolves (10-2). For as new as the UWF football program is, there were high expectations for their performance against Newberry. 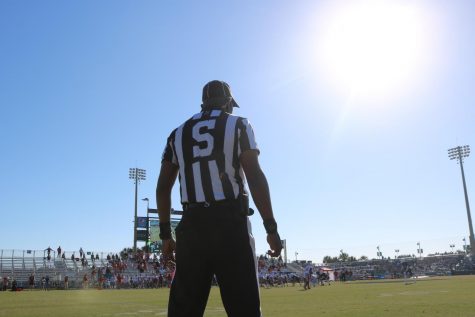 The entire stadium was lively and tension built as more and more red and white fans filled into the away team’s side to contrast our blue and green. Everyone was ready for kickoff, but no one could have prepared themselves for the showdown we were all about to witness. 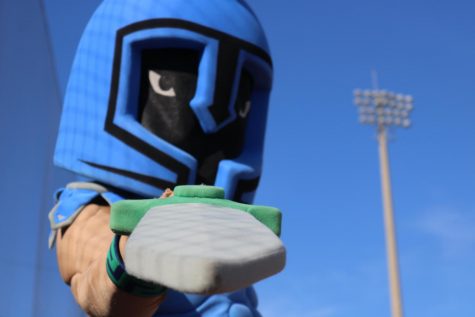 Newberry started the game off strong, as wide receiver Bryson Woodruff caught a 66-yard pass from quarterback Dre Harris, scoring a touchdown in the second play of the game. Newberry scored another touchdown and two field goals within the first quarter and officially made all of UWF aware their presence in this game meant business. 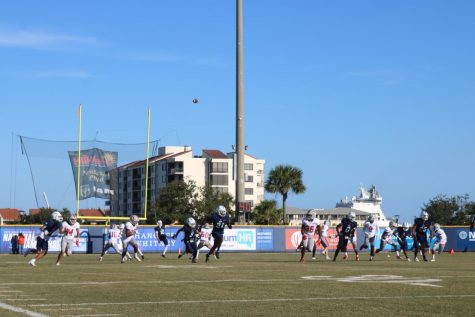 Newberry leads, 14 to 3. The blue and green crowd seemed to lose their excitement. The Blue Wahoos stadium was quieter than anticipated for a playoff game. But everyone stayed put, eyes glued to the field for what was to come of the rest of the game.

At the start of the second quarter, UWF made some strong defensive plays. Every sack had the crowd oohing and cheering as if their spirits started to pick up. But, Newberry’s wide receiver Deshun Kitchings had extremely quick feet that gave our defense a run for our money. Play after play the Argo defense couldn’t seem to keep up with Kitchings. They continuously swatted at him like a fly, almost impossible to catch.

The second quarter had a lot of ups and downs for both teams. Newberry caught personal fouls back to back and lost a total of 30 yards right at the start of the quarter. Meanwhile, UWF couldn’t seem to keep possession of the ball as quarterback Austin Reed threw an early interception, forcing UWF back on defense.

On defense, the Argos tango once again with Kitchings. 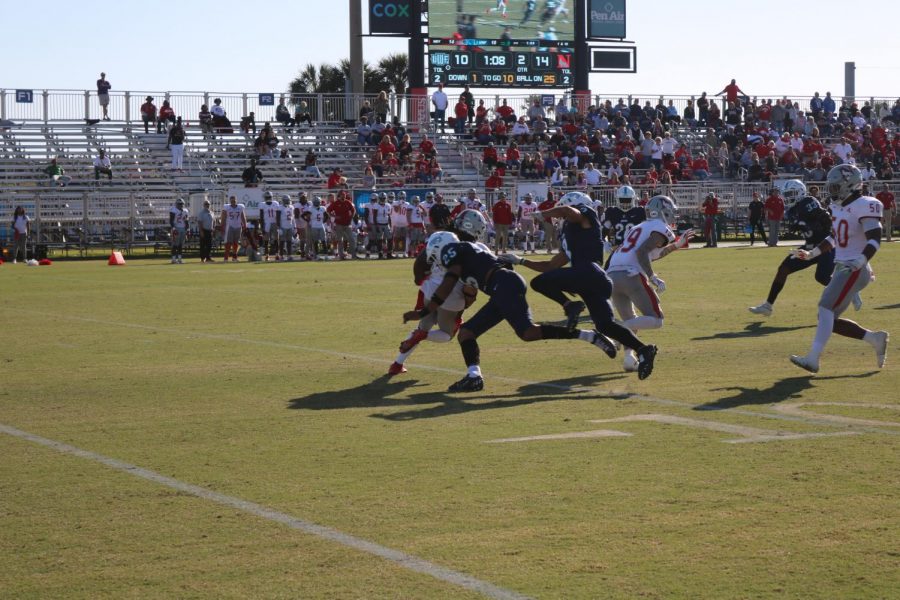 But nothing comes out of Newberry’s time on offense except aggression and high tension. The energy between the teams turns south even when the ball isn’t in play, they just can’t seem to handle the standstill. Referees have to get involved as a couple of players from each team get a little too close for comfort. 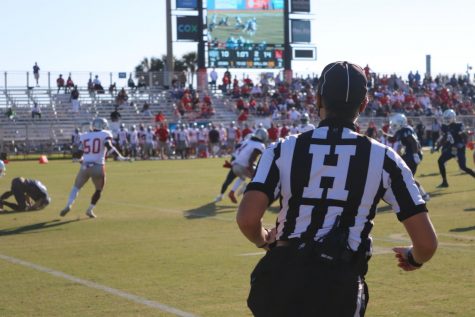 UWF, back on offense, decides they’ve had enough. With a minute left in the half, Ka’Ron Ashley completes a four-yard pass by Reed, scoring UWF their first touchdown of the night.

They had chance to make another play happen as Newberry gets even more aggressive with seconds left in the first half. Two back-to-back fouls on Newberry gave the Argos two automatic first downs, landing them right in the red zone. With 14 seconds left on the clock we snap the ball, Reed looks to the end zone, and instead of finding one of our own players, a red and white jersey jumps up to receive another interception. 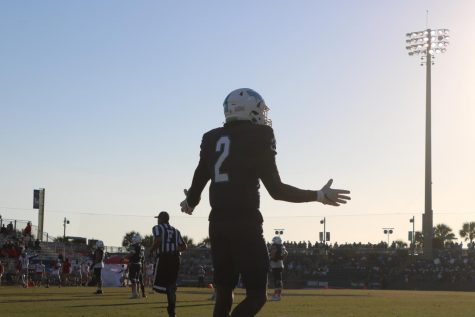 The half ended with UWF inching just a bit closer to Newberry’s lead, 14-10. 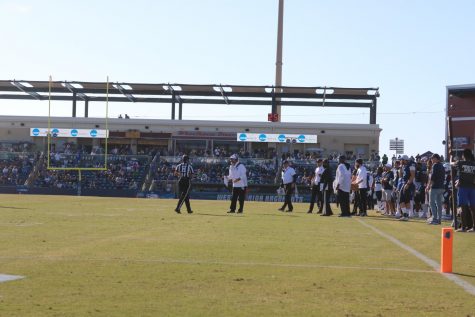 The start of the second half didn’t look good for the Argos. Their luck turns over quickly when UWF caught an interception when 10 seconds later, Reed completes a 42-yard pass to David Durden for a UWF touchdown with Cerra securing the accompanying field goal. 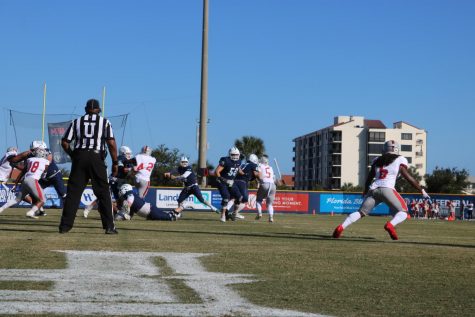 At this point, Blue Wahoos Stadium was on fire. 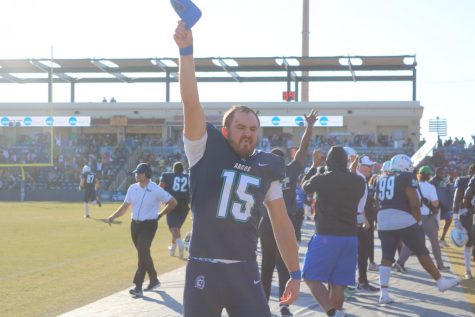 The Argos defensive players glowed with the energy that hadn’t been seen all game. The defense pulls through with another interception, sending the ball right back to the offense who does not hesitate to get the job done this time.

With six minutes left in the game, Reed throws a seven-yard pass to Ashley, tallying on another touchdown for the UWF Argos. Cerra’s field goal helps add onto UWF’s new lead, 24-14.

This creates a different type of ball game. With five minutes left in the third quarter, the energy of the stadium and the field is impossible to recreate. 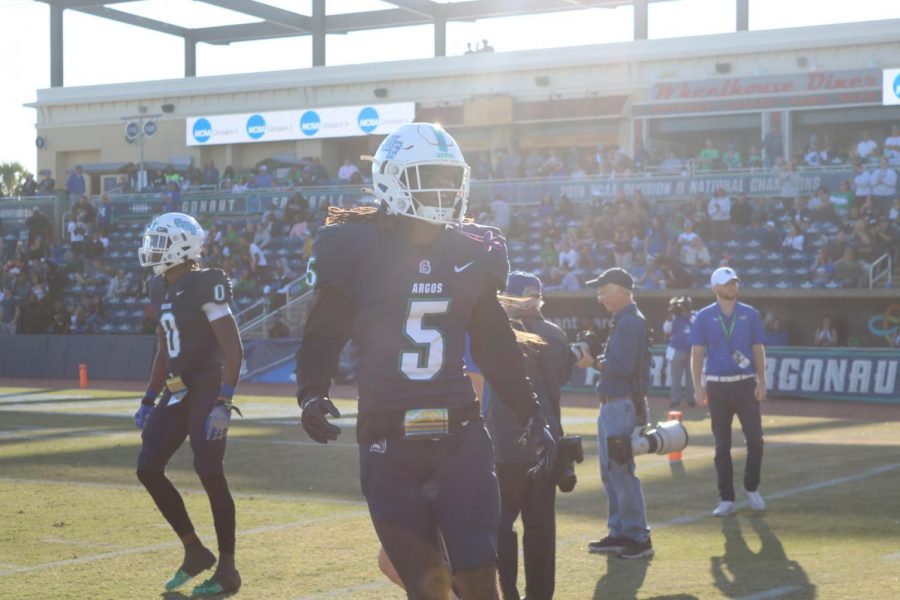 Newberry became too comfortable. Harris and Kitchings weren’t used to playing against this team. No longer too fast for our activated players, they both get sacked. UWF linebacker Stephon Williams knocks Harris off his feet and walks off the play with his helmet and shoulders raised high to end the third quarter.

Cerra obtains a field goal for UWF early at the start of the fourth quarter to put UWF leading at 27 to 14.

On offense, Newberry couldn’t seem to get it together. Harris is getting visibly agitated the Argo defense continuously cut his plays short. UWF is starting to feel more at home.

The ball is snapped to Reed and he goes for one of his iconic long passes. You can hear the crowd gasp and hold their breath as everyone sees the white and red jersey go up for the catch in front of the navy. 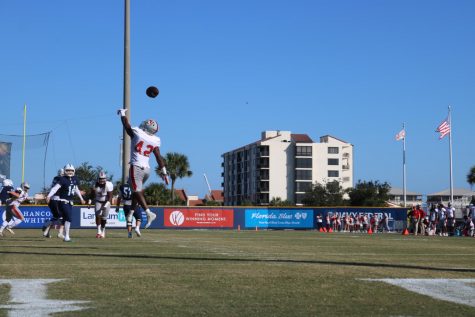 But the pass is incomplete. Everyone lets out their breath nervously.

The Argos reach fourth down and we decide to go for the punt. Newberry reads our play and sets up just in time to block the punt perfectly. Ke’Shoun Williams snags the loose ball and scores a competing touchdown. Newberry misses the field goal and inches closer to UWF with a score of 27-20.

UWF lines back up on offense, but an interception at fourth down gives the ball right back to Newberry.

The blue and green crowd gets antsy and starts to make any noise they can.

Newberry’s quarterback is getting his mojo back as he runs the ball and eventually helps get his team right in front of the end zone with three minutes left in the game. Harris throws a one-yard pass to Mario Anderson, and Cotton comes sweeping in for the field goal.

The UWF cheerleaders start to chant what everyone else can’t help but think, “block that kick,” but the UWF defense didn’t succeed. With just three minutes left in the game, UWF and Newberry are tied, 27 to 27.

The UWF crowd is dead silent. The only sound comes from the screaming coaches and players on the sidelines and the cowbells from the Newberry stands. 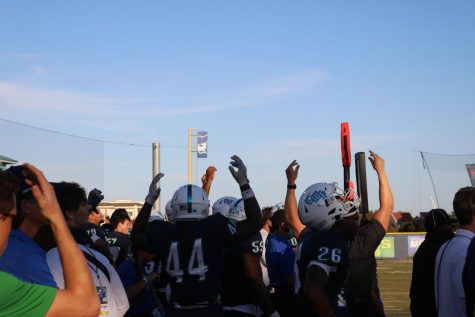 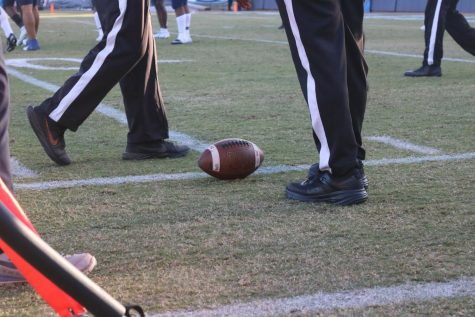 With a quick break, the teams jump right into overtime.

This is the second time UWF has ever had to enter an overtime period.

Cerra quickly puts three points on the board for UWF with a 35-yard line field goal helping UWF lead 30 to 27, but that is all UWF is able to scramble up in time. The UWF defense ran onto the field carrying a huge amount of weight on its shoulders.

Harris does what he’s been doing all game, puts the moves on, and uses his speed to get Newberry right in front of the end zone. UWF holds them off for a few plays but is unable to hold out any longer.

Anderson makes another one-yard play to secure the 33 to 30 point win for Newberry.

“I was hoping to come off of a crazy game for West Florida last week scoring 60 on the number one team in the region…I was hoping that they would be sleeping on us just a little bit,” said Newberry’s Coach Todd Knight. “We talked about starting fast, jumping out there, and trying to get it done quickly before the sleeping giant woke up.”

The only noise in the whole stadium came from the Newberry stands. Mostly cheers, but some side remarks chanting for UWF fans and players “to go home.”

Coach Knight emphasized how grateful and lucky Newberry was to walk away with this win against a program like West Florida’s.

Most UWF players sat on the field holding their heads in their hands but were kindly met by their coaching staff and even some Newberry players to help pick them back up. 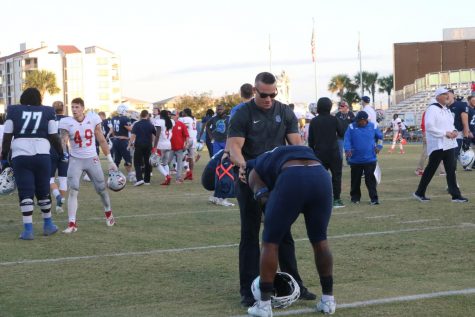 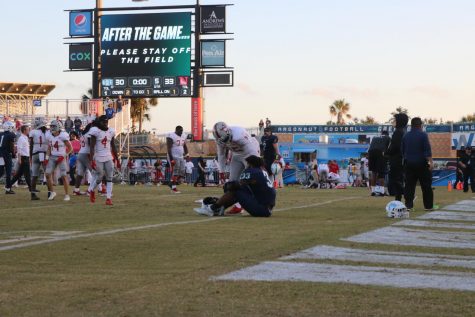 More emotion filled the stadium now than they had during the game.

“This falls on me, I got to find a way to get this team to play better,” said UWF Coach Pete Shinnick. “I really felt like we had a lot of opportunities there to get some things done that we just didn’t do, so I just feel bad.”

Newberry plans to continue through this tournament with the same grit and determination that they held themselves together with during this match.

Campbell, who transferred to UWF during COVID-19, assured Shinnick that “this last year at Pensacola was the best year of his life,” and made it clear that no time spent on this team was wasteful.

Reed stated that no blame was to fall onto Coach Shinnick, as he believed the UWF coaching staff “prepared the team plenty” but that the team simply just didn’t perform the way they know they can.

The UWF football program is only five years old and has already accomplished amazing records, titles and one heck of a name for itself. This isn’t when or how anyone wanted to end the 2021 football season, but this loss should not take away from the accomplishments this team has worked so hard to achieve. Those are the moments our Argo Nation will remember and forever remain proud of. 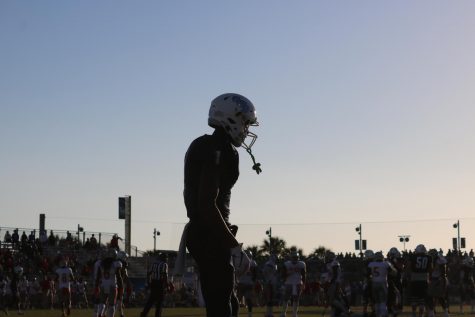