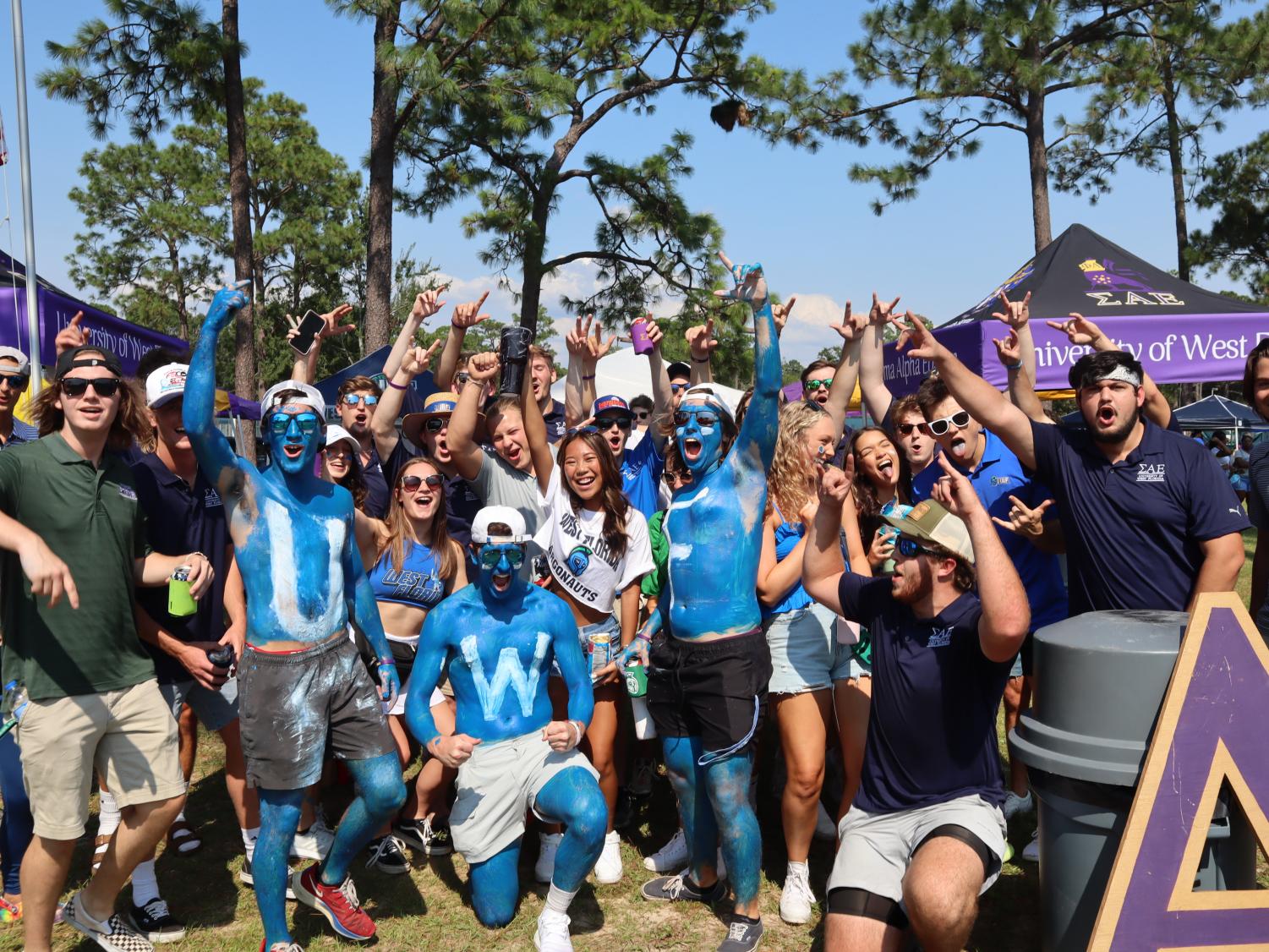 For the last year, students have been asked time after time again to refrain from close contact or in-person events and instead reminisce on past memories in light of COVID-19 social distancing precautions taken by the university. But on Sep. 11, there was no more reminiscing as the first on-campus football game brought tailgates full of Argos and Pensacolians out from the depths of their living room couches and into the sunshine.

Students prepared their game plans for the big day, as the anticipation for college football and social interaction dangled right before their eyes. Four hours before the game, students lined up outside surrounding parking lots trying to get front row spots to unload their traditional tailgate setups.

In the past, there’s never been anything off the table when it comes to the UWF student tailgate section. Large, reclining couches, flat-screen televisions and wooden, homemade bars were considered the bare minimum. Besides the location, there seemed to be no change in preparation or execution of this historical event.

As students unloaded the beds of their trucks, trunks of their SUVs and backseats of their sedans, something in the air started to change.

Although it was about 90 degrees outside, I felt a faint wind blow across the open space, almost as if the Blue Wahoos’ ocean breeze came searching for us.

The smell of propane grills filled the air and the clicking sound of pop-up tents carried on in a rhythmic beat.

Everyone seemed to be filled with some kind of antsy tension, waiting to overflow like the foam of an ice-cold beer out of a red solo cup. I had never experienced anything like this during my time at UWF, I didn’t know what it was until I was already in the thick of it…

Our school was coming back to life.

Exhilarated, comfortable, proud, unforgettable; all words used by UWF students to describe their impression of the first-ever on-campus tailgate.

“It was a hell of a time,” said senior Courtney Bowen. “It was my first-ever tailgate and it was great.” 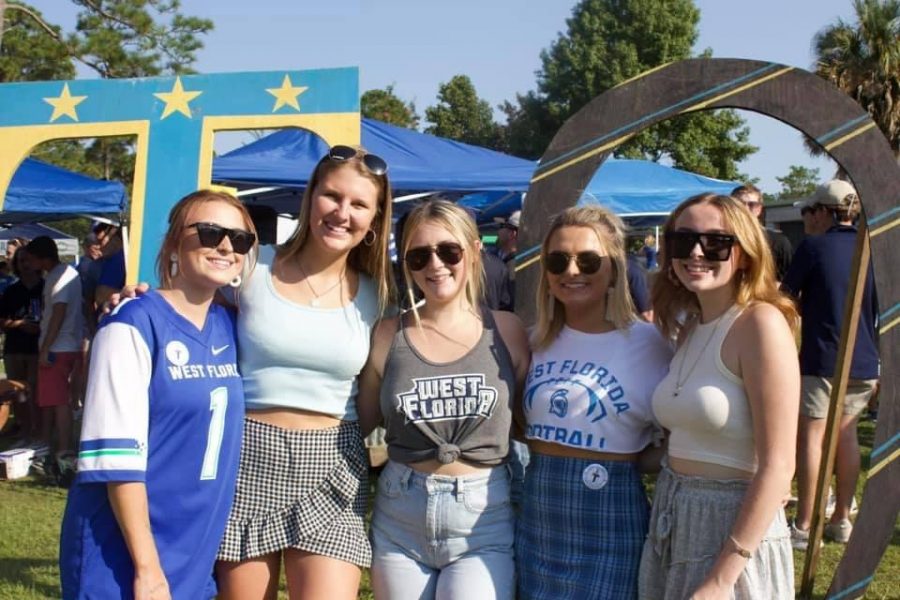 Like Bowen, this was many students’ first experience at a university football tailgate. Many of the first-timers were freshmen, transfer students or sophomores known as second-year freshmen because of the lack of involvement and experience COVID-19 forced this year’s sophomore class to have. 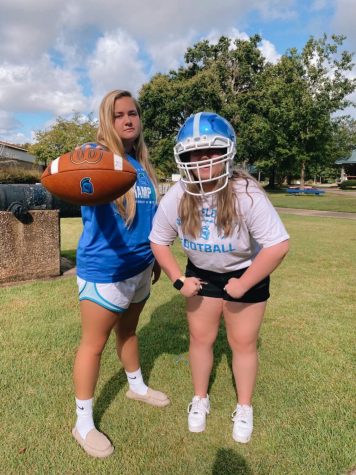 “My class was stripped of all the experiences the older classes have that gave them the ‘Argo pride’ that they have today,” said sophomore Heidi Hinson. Hinson is also a part of UWF’s Homecoming Executive Board and discussed how school spirit and pride is something she wants to try to teach and “give back” to her peers.

“It made me happy seeing all the students come out in large numbers again,” said student Jackson DeBolt. “I felt like my college experience had been restored.” 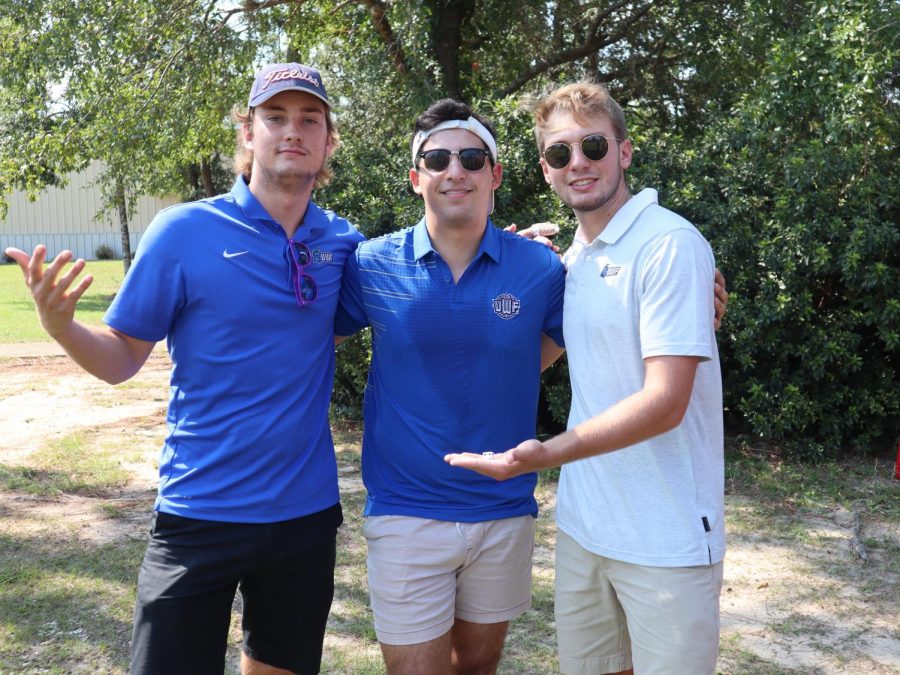 That seemed to be the common theme amongst the students I spoke with. Everyone felt like they were being cheated out of a traditional college experience and acted accordingly, desperately soaking up every drop of normalcy they could.

Everyone discussed how things were “going back to normal,” but to me, this was better than normal. I watched as members of different fraternities congregated over a friendly game of beer-die, as students danced their hearts out to music from neighboring tents and as three students illustrated what it truly meant to have Argo pride as their bodies dripped with blue and white paint. 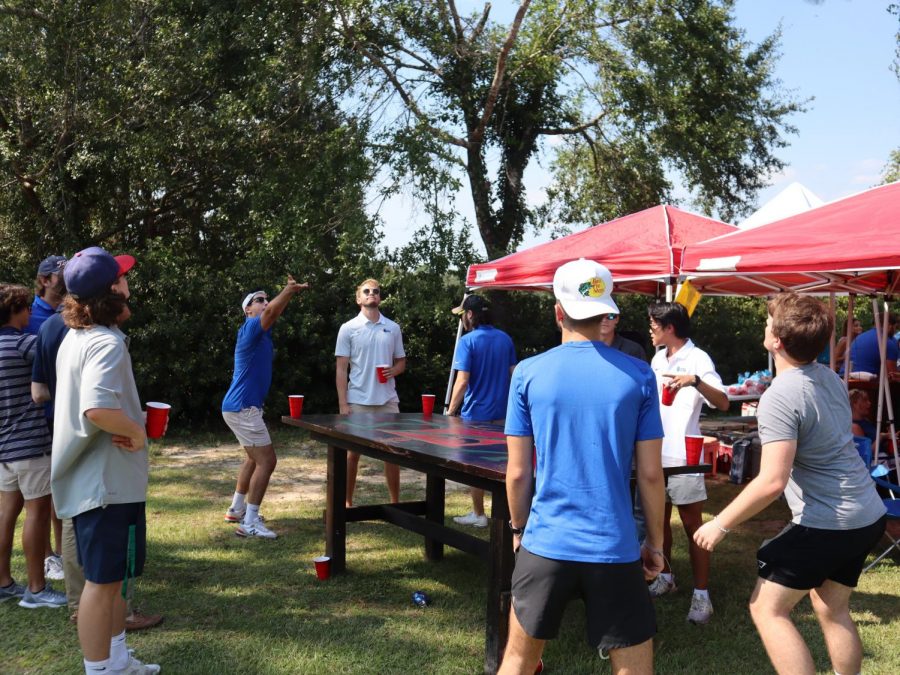 As the partying hours of the tailgate ended and students started to enter the game, I honestly expected the enthusiasm to disappear. From personal experience, the tailgate always seems to be the main event on game days. When the beer dries up, so does the student section.

However, in past seasons, our football team wasn’t storming the field with a national championship tucked under their belt. 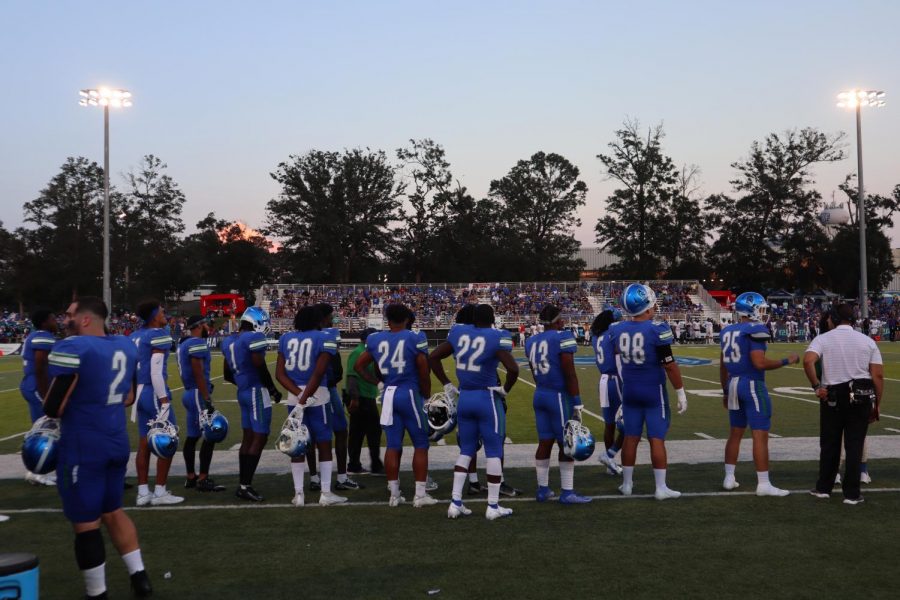 Students and spectators piled into Pen Air Field attempting to snag the best seat they could find. Whether that was on the hill, in the newly constructed bleachers or up against the field’s fence, it didn’t seem to make a difference if they could catch a glimpse of our champions.

I took this slow moment to chat with one of the police officers providing security to the game. As it turned out, the students weren’t the only ones digging the temporary set-up. I did not have a chance to catch the officer’s name before he had to return to his duties, however, he spoke with respect towards those responsible for the event and towards the students for “keeping it together.” 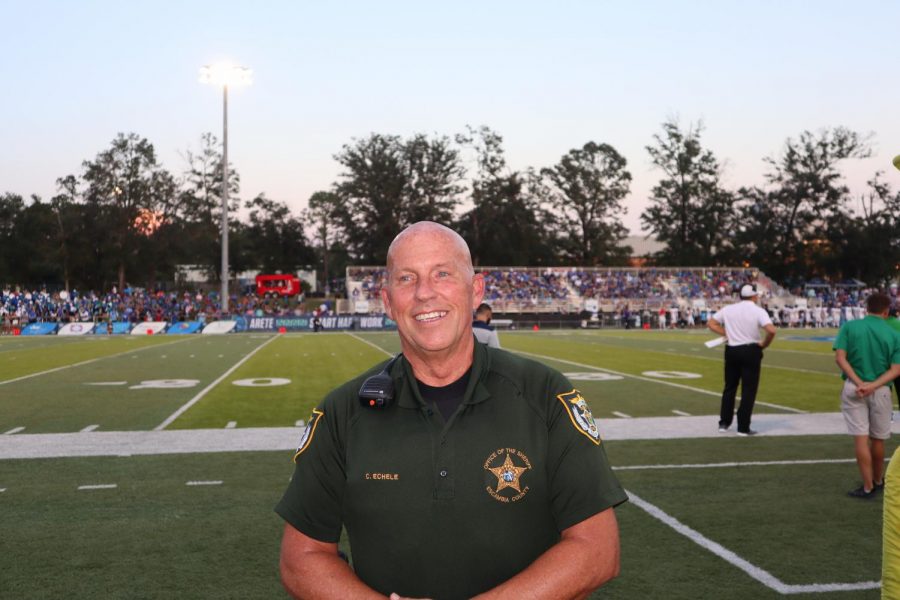 Then, with a pat on the back and the blow of a whistle, the game had begun, and the crowd seemed to hit its reset button.

At this moment there was no better feeling than being a UWF Argonaut.

UWF football pulled out a fantastic win with a final score of 63-14, in typical national champion fashion.

As students exited Pen Air Field, they slowly fell back to reality. Their faces were dried out from sweat and sun exposure, their feet were tired from celebrating each touchdown and their insides could already feel the regret of the early afternoon activities settling in. 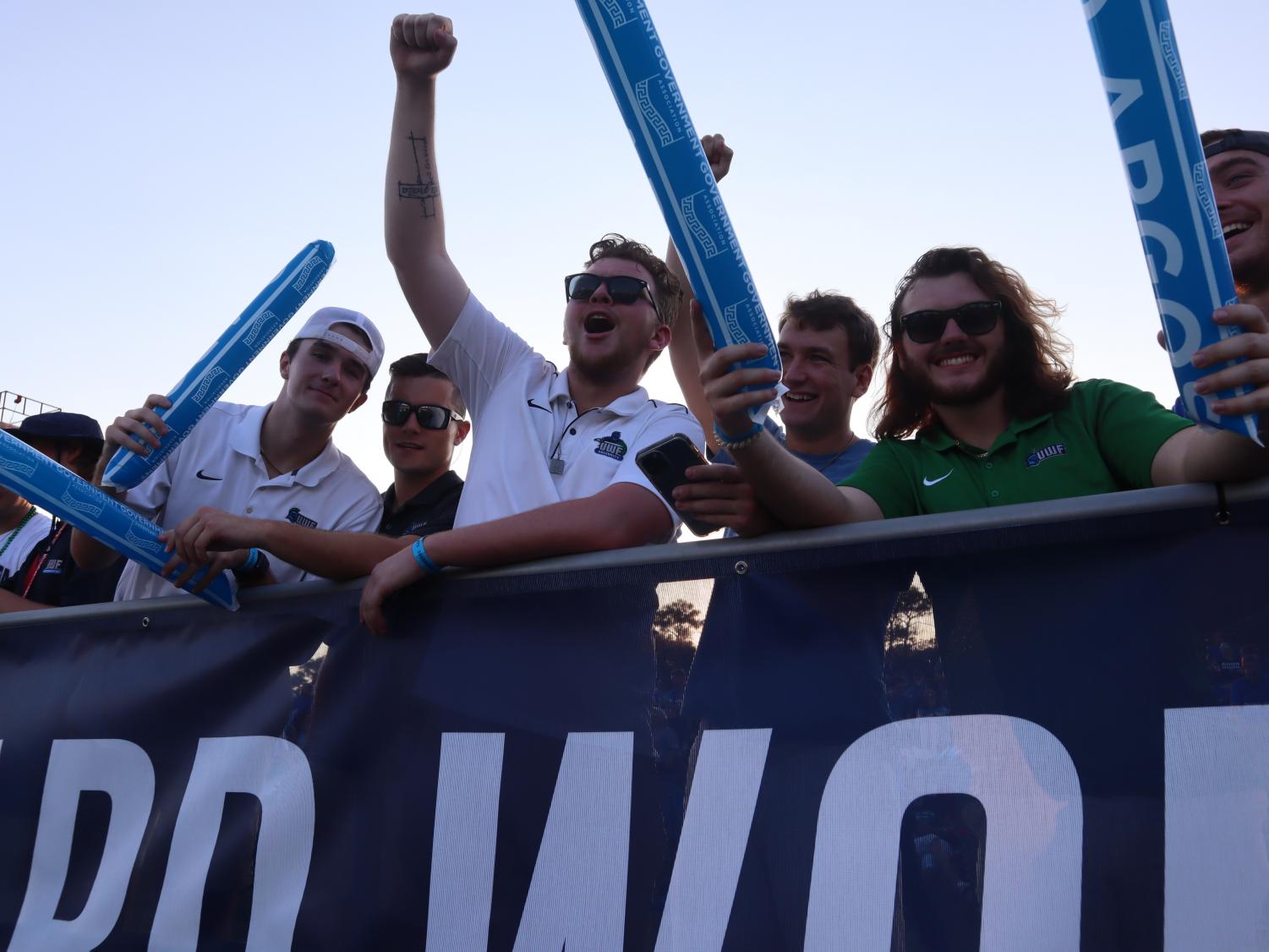 “Today emphasized what being an Argo is all about,” said John Micallef, a junior student but a “super-senior tailgater.” 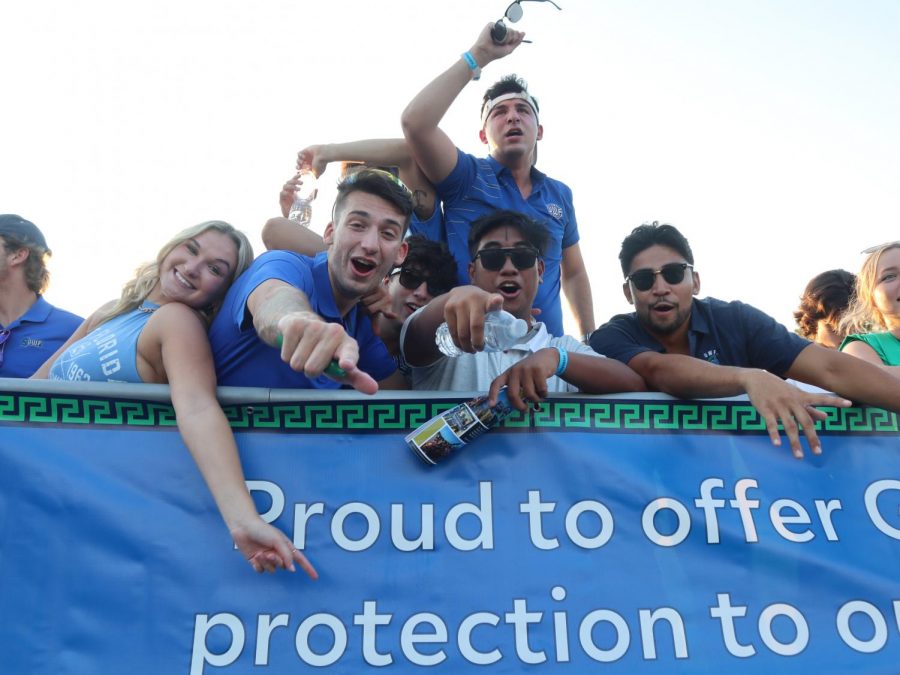 UWF embodies the story of Jason and the Argonauts; a great warrior, overcoming obstacles and villains to steadily stay on track in his search of the golden fleece. No matter what our version of the golden fleece may be, UWF students prove to remain persistent, tireless and forward-focused individuals. We stay true to what we want in this life, and having a university that backs us, only grows us stronger.

This tailgate and football game not only provided our student body with some damn good memories, but also helped prove to ourselves that we still have the energy and confidence to get back on our feet when times get tough.