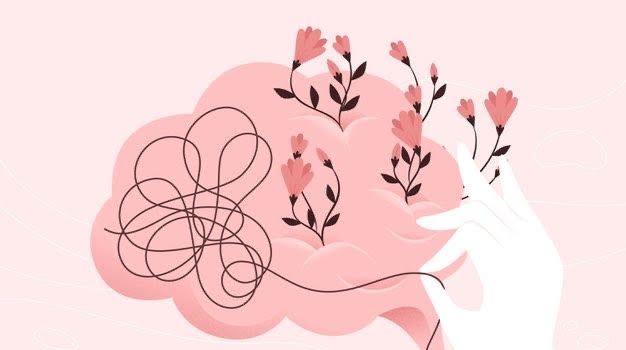 Although it might seem that mental health has recently become a topic of discussion over the past few years, and more specifically since 2020, the dreadful effects of mental illness have actually been haunting people since the Stone Age.

While the 2000’s have definitely brought about more awareness and education about mental health, 2020 was the year that truly opened the eyes of hundreds of thousands of people around the world to the severity and importance.

To encourage further education and awareness, it is important that we know and understand the history that has led us to where we stand today.

It is also crucial to note that the term “mental illness” is a broad umbrella term that encompasses all 297 disorders currently listed in the DSM-5 and is not limited to the most commonly known mental disorders.

Before the late 19th and 20th centuries, most mental illnesses were attributed to supernatural forces that centered around religion and demonic possession.

Anyone who behaved abnormally, whether it was mild depression or paranoid schizophrenia, was believed to be inhabited by a force outside of human nature.

In as early as 6500 BC, cave art was found that depicted extreme sadness and archaeologists have found skulls that display trephination, or the removal of sections within the skull. Some historians believe that this was a product of people who were hearing or seeing things and those who were considered chronically sad (Farreras, 2021).

Once receiving this surgery, the “evil spirits” were released. However, there is some debate that the supernatural cannot be the proven cause and It may relate to medical reasons.

Kahun papyrus from Egypt and Mesopotamia was found that dates back to 1900 BC and contains written evidence of depression and other mental illnesses. It listed mental disorders followed by a physician’s judgment of the cause and appropriate treatment.

The Greeks were the first to believe that behavior resulting from mental illness was not caused by supernatural forces.

Hippocrates, the father of medicine, argued that abnormal behavior was just like other physical diseases of the body. He did not believe that mental illness was shameful or that people should be held fully responsible for their behavior.

The body was composed of four basic humors, blood, phlegm, yellow bile, and black bile. When these basic humors were imbalanced, mental diseases began to form according to Hippocrates.

While there were some physical operations, he commonly prescribed rest, relaxation, and a change of environment or diet to improve mental health. He even believed removing a patient from a difficult family could help restore the mind (Farreras, 2021).

Also, during this time, the state claimed no responsibility for “insane people,” provided no asylum or reform, and was able to completely take away their rights. They could not marry or own property. The general public feared these people and was often shunned or even stoned. (Maher & Maher, 1985).

Most notably in the 11th century, the Catholic Church was being threatened and anything that went against the church began being classified as Satanism.

“Between the 11th and 15th centuries, supernatural theories of mental disorders again dominated Europe, fueled by natural disasters like plagues and famines that lay people interpreted as brought about by the devil. Superstition, astrology, and alchemy took hold, and common treatments included prayer rites, relic touching, confessions, and atonement.” (Farreras, 2021).

Believing they were under attack, many of those who were mentally ill became categorized as witches and lost their lives because of this label.

Beginning in the 13th century and not declining until the 17th and 18th centuries, witch hunts prevailed, and the acknowledgment of mental health conditions was nearly non-existent.

However, Johann Weyer published the “Deception of Dreams” where he argued that those being accused of being witches were suffering from melancholy (depression) and insanity. The Church banned his writings and many others that also proposed this standpoint (Nolen-Hoeksema, 2014).

A nun known as Teresa of Avila also tried to explain that hysteria was not the result of the devil but of sickness, but her voice was also silenced.

Mental hospitals and asylums began in the 16th century but were nothing like the modern mental hospitals you are picturing. In order to fully encapsulate the conditions of these asylums, the following is a description of the treatment from patients in La Bicêtre Hospital in 1547.

“The patients were ordinarily shackled to the walls of their dark, unlighted cells by iron collars which held them flat against the wall and permitted little movement. Ofttimes there were also iron hoops around the waists of patients and both their hands and feet were chained. Although these chains usually permitted enough movement that the patients could feed themselves out of bowls, they often kept them from being able to lie down at night. Since little was known about dietetics, and the patients were presumed to be animals anyway, there was little attention paid to whether the food was good or bad. The cells were furnished only with straw and were never swept or cleaned; the patient remained in the midst of all the accumulated ordure. No one visited the cells except at feeding time, no provision was made for warmth.” (Nolen-Hoeksema, 2014).

The laws regarding the confinements of the mentally ill at this time were concerned with the protection of the public and the family members of the ill, not the person themselves. A lot of the people who were put in asylums were considered “undesirables” of society and were merely a way to keep them locked away from the public.

At the time, these people were considered animals who did not have the capacity to reason or control themselves and the actions taken were not viewed as inhumane. Inflicting pain was viewed as the best possible treatment.

However, the 18th century brought about opposition and protests as people began to see and hear the conditions that the mentally ill was forced to live in.

New humane treatment was put in motion based on the psychological view that people developed problems because they had become separated from nature and had succumbed to the stresses imposed by the rapid social changes of the period.

Philippe Pinel, a leader for the movement of moral treatment, took charge of La Bicêtre Hospital and argued that many forms of mental illness could be cured by restoring patient’s dignity and tranquility (Farreras, 2021).

He ordered patients should be able to walk freely around the asylum, provided with clean and sunny rooms, comfortable clothes, and good food.

Although this may seem obvious, unfortunately these conditions were unheard of at this time.

People who had been locked away in darkness began to be able to control their behavior and regain their life. The public had extreme doubts, but he proved them wrong, and some were even able to be released from treatment completely.

In 1796, Quaker William Tuke opened the Retreat in England in response to the brutal treatment he saw at other facilities. It was designed to restore patient’s self-restraint by treating them with respect and dignity and encouraging them to exercise self-control.

America was behind on the mental hospital reform and was still participating in violent, intrusive operations, electric therapy, and physical labor as forms of treatment in the 1800’s.

Dorthia Dix was a retired schoolteacher who discovered the negligence and brutality poor people experienced. Her lobbying efforts lead to the passage of laws and appropriations to fund the cleanup of mental hospitals and the training of mental health professionals dedicated to the moral treatment of patients (Farreras, 2021).

Between 1841 and 1881, she personally helped establish more than 30 mental institutions in the U.S., Canada, Newfoundland, and Scotland.

“By the mid-1950s, a push for deinstitutionalization and outpatient treatment began in many countries, facilitated by the development of a variety of antipsychotic drugs.” (Nolen-Hoeksema, 2014).

Somatogenic and psychogenic explanations of mental illness were now regarded as appropriate approaches rather than supernatural or spiritual ones.

Although it might seem like this harsh treatment was thousands of years ago, it wasn’t until the very late 1900’s that mental illness began to be viewed as a chemical imbalance.

“Restraints, electro-convulsive shock therapy, and lobotomies continued to be employed in American state institutions until the 1970s, but they quickly made way for a burgeoning pharmaceutical industry that has viewed and treated mental illness as a chemical imbalance in the brain.” (Nolen-Hoeksema, 2014).

Thanks to the developments in psychology, neuroscience, biology, anatomy, and chemistry, mental illness treatment, education, and awareness have increased exponentially over the past 40 years.

Compared to past generations, mental health has become much easier to discuss and acknowledge in work, life, and relationships.

Only a few hundred years ago, many of your friends and family members could have been cast out of society and thrown in a poorly managed hospital simply for having a brain imbalance that can be healed through natural, humane methods. Maybe even you are included.

Understanding the history behind mental health and the recognizing of mental illnesses helps to further awareness and action.

There still is a long way to go to end the stigma behind mental illnesses and improve medical care, but the past ten years have shown a huge amount of hope and humanity has come a long way since first discovering mental illnesses.