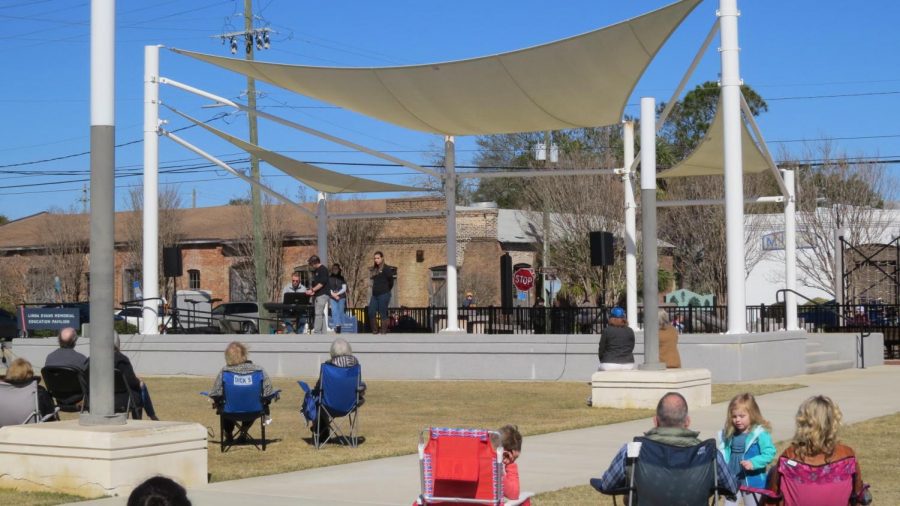 On Saturday, February 20th, downtown Pensacola was treated to an experience it had been lacking in for nearly a year: a live concert. The Pensacola Opera held one of their first shows in 9 months at the UWF downtown park, located across from the Children’s Museum.

The day could not have been more accommodating for leisure listen in the park. About 65 degrees and sunny, music filled the air of an already pleasant afternoon. The crowd of around fifty were cordial and engaged, all while doing a good job of remaining socially distanced.

The Pensacola Bay Area Impact 100 was thanked by the members of the Opera for making the event possible. The organization is compiled of women who are committed to improving the community by providing grants to local non-profit groups. The PA system used at Saturday’s concert was provided by Impact 100.

The performance was stripped back but retained the music’s grandiose presence. 4 Vocalists, one male and three females, accompanied by a pianist were the only one’s occupying the stage. Though small in numbers, the performer’s impact was still felt by all in attendance.

One of the vocalists spoke on how exciting it was to return to live performance after such a long dry spell.

“It’s a thrill”, he said, “To be able to perform live, even in outdoor settings like this, is a blast”.

The 9-month hiatus certainly brewed much anticipation on behalf of the performers, as they have a stacked slate moving forward. The Pensacola Opera will perform at various outdoor venues across the city as a part of their ‘Al Fresco’ series. Last Sunday they performed at Seville Square and this Saturday was at the UWF Historic Trust Museum Plaza.

This uptick in live events is coinciding with the rollout of the covid-19 vaccine. Since vaccine distribution began two months ago, roughly 63 million doses have been given, according to NPR Health. Even with 13 percent of the population now vaccinated, traditional concerts are still a long distance in the future.

However, in an increased age of isolation, concerts have the ability to bring warmth and comradery to everyone being plagued by the pandemic. Live music, done safely in this era, can offer a retreat for anyone suffering or in need of fellowship.

I believe that one of the members of the Opera summed up the impact of live performances with this,

For information and a complete calendar of upcoming events involving the Pensacola Opera, check out their website and social media profiles.