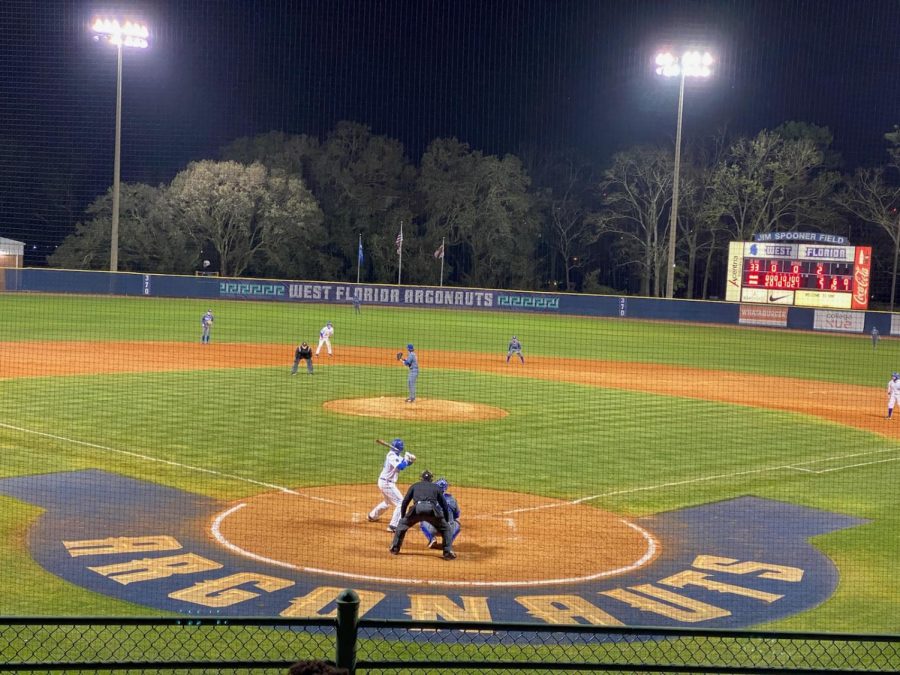 On Saturday night, the Argos had to contend with two things: the cold temperature at Jim Spooner Field and the Shorter Hawks. Neither seemed to faze UWF’s players.

The Argos came into their first matchup with the Hawks as the 20th ranked team in the nation and undefeated after last week’s series sweep over West Alabama.

Great hitting on the part of UWF really defined the game, as the Argos beat the Hawks 12-2.

This was the second game in a row that UWF beat a team by at least 10 points, thereby invoking the mercy rule.

The rule was invoked after UWF scored six runs in the bottom of the 8th inning.

Joey Wozniak, who came to bat just once Saturday, put the game on ice with a home run that flew over left field. Two runners were already on base.

While Wozniak made the most of his opportunity with the memorable home run, other Argonauts also took advantage of their plate appearances.

Jack Copley had what was probably the best night of the batters for the Argos.

Copley had five hits on five appearances at bat and scored two runs.

The game started with a solid 1st inning for the Argos as O’Shea hit an RBI single and Copley hit an RBI double. Justin Dunham, who had a leadoff double, and O’Shea ran home on those RBIs and made the score 2-0 quick.

The 2nd inning saw both teams get runners on base but fail to send any home.

UWF added another run in the 3rd inning when Miller Hancock hit an RBI single with the bases loaded.

The 3rd also saw Shorter replace first baseman Cory Mason after he was injured after a play. Matt Christian stepped in at 3rd base and Shorter adjusted their lineup accordingly.

Shorter was able to get on the board in the 4th inning with a home run hit by Nathaniel Butterworth, the Hawks’ starting catcher.

UWF increased their lead back to three in the 5th inning, making the score 4-1. The score came on an RBI single from Copley.

The 6th inning brought some of the more dramatic moments of the game.

Shorter kicked off the inning with a single from Jacob Pajer, who had two hits in four at bats for the Hawks.

Two batters later and Butterworth again pushed the Hawks to within two. He did so on an RBI double that sent Pajer to home plate.

When it was UWF’s turn at bat, there was a tense moment between Coach Mike Jeffcoat and an umpire over a call that was made.

The call revolved around whether the umpire would honor an apparent Argos’ timeout or go with the fact that the Shorter pitcher threw the ball allegedly before the timeout. The umpire went with the latter, upsetting the coach.

Jeffcoat got out of the dugout and went up to the umpire to confront him. You could hear the frustration from up in the stands and see the finger pointing.

“The game was close at that point, still 4-2, and I knew that the call was important,” Coach Jeffcoat said. “I will always protect our guys.”

Ultimately, Jeffcoat returned to the UWF dugout and play resumed.

Despite giving up two runs, Ryan Brewer pitched well for the Argos on Saturday.

Brewer had eight strikeouts in the six innings that he played and posted a 2.45 earned run average.

He was replaced in the 7th inning by Josh Pahlad in relief.

With the 7th inning, UWF stretched the lead to 6-2 with Jack Schad walk while the bases were loaded and a sacrifice RBI from Bryant Harris, Jr.

UWF finished off the game with two strikeouts and a quick out, as well as a six-run 8th inning for the Argos.

Estrada hit a single up the middle after the first batter, Dylan Menhennett, struck out.

The following batter, O’Shea, hit an RBI single, but before that Estrada stole 2nd base due to a wild pitch.

Copley then singled up the middle, putting two runners on base. Sam Clement came into pinch hit for Schad and hit an RBI single, which took O’Shea home.

Bryant Harris, Jr. stepped up to the plate and delivered another RBI single for the Argos. Harris, Jr. was able to advance to 2nd base on an error on the play.

The very next batter to step up was Wozniak. As mentioned earlier, he hit a home run that ended the game and gave the Argos a 1-0 lead in their series with Shorter.

The Argos remain undefeated at 4-0 as they look to Sunday’s double header.

UWF will try to prevent Shorter from getting revenge in those two games. The first game in the double header starts at 1:00 p.m. and the second game starts about 30 minutes after the conclusion of the first one.