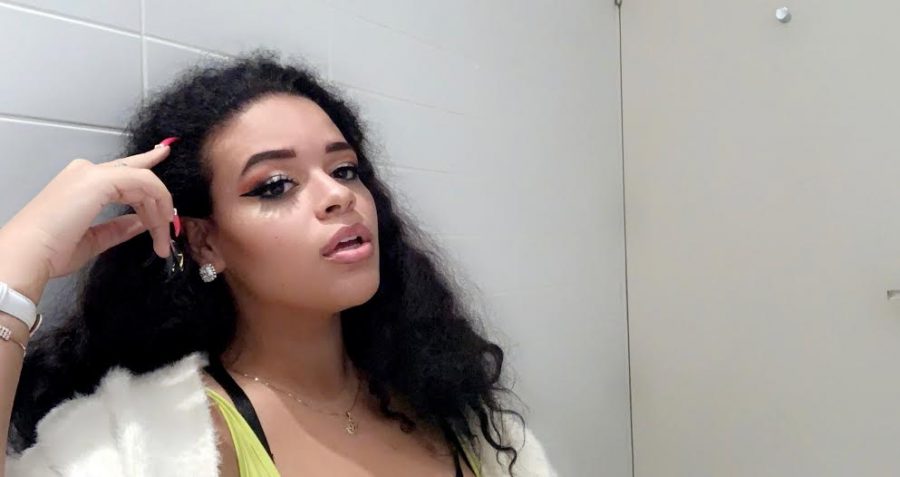 Life as a college student comes with an array of different challenges. Students have to balance their schoolwork, jobs and personal lives as they pursue their education.

The idea of becoming a new mom in the midst of college life seems life-shattering for many, but for Aria Jones, a UWF junior, nothing was going to deter her from finishing her education.

A typical day for Jones starts by waking up an hour before her newborn baby to get ready for the day. Once her daughter is awake and ready to start her day, Jones balances working on homework while her daughter does tummy time.

At noon, Jones puts her daughter down for a nap. “That’s when I really get stuff done,” Jones said.

Jones came to UWF from Melbourne Fl. to pursue her bachelor’s degree in art administration. She was in her sophomore year of college when she found out that she was pregnant.

“I didn’t believe it,” Jones said.

Jones’ friends had gone through pregnancy scares in the past but they always came up negative, so when she went through it herself, she didn’t think much of it.

“I went out and bought $60 worth of pregnancy test before going to the Dr.,” Jones said.

Though Jones was fearful at first, she wasn’t going to let this stop her from continuing her education.

“I never thought about not finishing school,” Jones said. The stigmas surrounding pregnancies and being a new mom while in school was not going to get in her way. “Dropping out was never an option,” Jones said.

Jones was halfway through her pregnancy during the COVID-19 outbreak in March. “It was scary because hospitals were talking about not letting anyone be with you during the birth,” Jones said.

As Jones was faced the realities of a college pregnancy, she was encouraged by the story of when her mom was in college. “My mom had me in college too,” Jones said.

Jones’ mother continued pursuing her education throughout her pregnancy as well. With a new baby in tow and being mostly on her own, she pressed on to graduate with a master’s degree.

“I hope that she (Jones’ daughter) finds admiration in me the way I do in my mom,” Jones said.

Jones’ daughter was born via emergency c-section on August 11, just under two weeks before the start of the fall semester.

Jones’ mother was able to come up to Pensacola to help Jones during the delivery, and since everything was online Jones was able to go home to Melbourne while she healed from the c-section.

Once Jones felt comfortable with managing everything on her own, she moved back up to Pensacola.

The pandemic has brought challenges for everyone, but for Jones, there have actually been some benefits to having to attend school virtually.

“I get to be a part of this time in her life,” Jones said.

Instead of having to worry about getting her baby to childcare and working her school schedule around the hours of daycare, she is able to do all of her coursework from home around the baby’s schedule.

Her daughter is changing and learning new things every day and Jones is there to witness it all. She gets to enjoy plenty of bonding time, laughter and lots of baby snuggles.

Jones is taking every precaution to keep her new baby girl safe amid the pandemic. She avoids going to Walmart due to the lack of social distancing and lack of mask-wearing within the store.

“I feel really uncomfortable there,” Jones said. “I can’t put a mask on the baby.”

Jones and her daughter routine take outings to Target, where she feels shoppers seem to take more precautions.

After college, Jones hopes to pursue a career in an art gallery or museum environment. She has a love for culture and wants a career where things are always changing.

Her advice to new moms in college is to not be afraid to take every bit of help that is offered to you.

She encourages other students to not be afraid of reaching out to your instructors and let them know what’s happening in your life as most professors want to ensure you succeed.

Jones hopes her daughter grows up to understand that she will be there to support her in anything she wants to pursue, every step of the way.