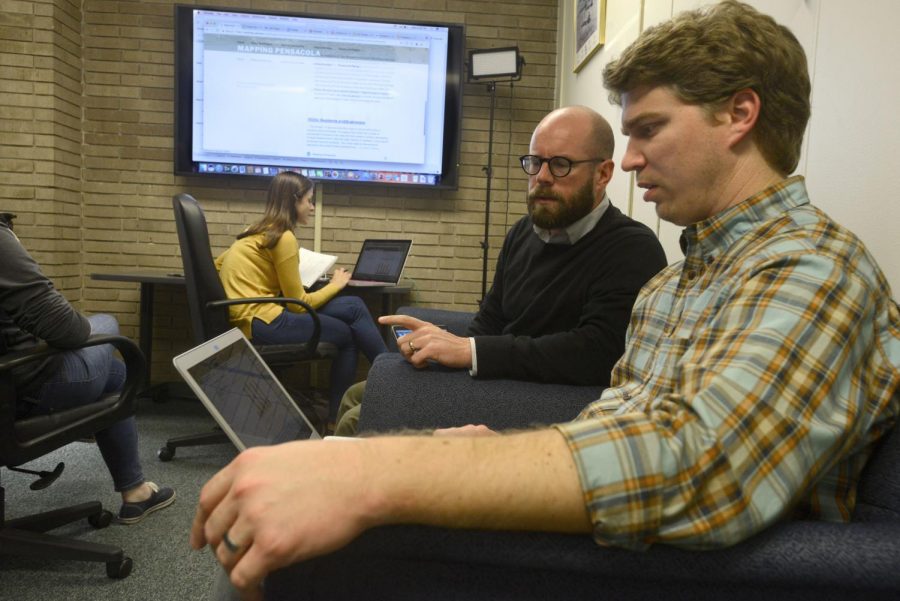 Many students at UWF have gone to the beach during their time here, after all the beach is not very far away from campus. In fact, many Americans travel to beaches every year. But what is the history of our coastlines? How did the shores of the Emerald Coast and, more broadly, the United States become the beaches we know and travel to today?

These are just some of the questions that Jamin Wells, Ph.D., an assistant professor at UWF, attempts to answer in his work and his forthcoming book, Shipwrecked: Coastal Disasters and the Making of the American Beach, which is being published by University of North Carolina Press.

For Wells, the coast is a topic where he feels at home, partly because, for most of his life, he has called the coast home.

“I grew up kind of on and under the water,” Wells said.

Wells was born and raised in a working-class neighborhood in Warwick, Rhode Island. His family opened a dive shop when he was in high school and he soon took to diving, eventually teaching it through the dive shop during the summers of his undergraduate education at the University of Rhode Island.

“Learning how to work with all different types of people in a high stress environment, learning that I like to teach,” Wells said, when talking about his time at the family dive shop.

As if diving was not enough to explain Wells’ maritime musings, he also worked on a tugboat for little over a year.

“We built docks, we dredged marinas,” Wells said. “You know, it was like crazy, New England maritime stuff.”

Wells got the job through making connections on the waterfront. He left the dive shop to work on the tugboat because it payed more.

“It enabled me to save enough money to go to grad school,” Wells said.

Wells went back to the University of Rhode Island for his master’s degree, although not without hesitation.

“I didn’t want to go back to the school I got my B.A. in for my master’s degree,” Wells said, “but it was a great opportunity.”

After grad school at Rhode Island, Wells looked to obtain a Ph.D. He applied to three or four different programs due to the competitive nature of trying to become a Ph.D. student.

Wells soon became a candidate at the University of Delaware, despite his original intentions of not going there.

He eventually went to Delaware because they accepted his proposed project and because he was impressed with the faculty and their interests in exploring the interconnection of technology, capitalism, and culture.

The project that Wells worked on at Delaware is the precursor to Shipwrecked.

While working on his Ph.D., Wells started teaching, only this time it was in college classrooms. After finishing up his Ph.D. program at Delaware, Wells became an adjunct professor at the Sea Education Association, based in Cape Cod.

The Sea Education Association, otherwise referred to as SEA, is a study abroad type opportunity for those in Environmental Studies and other fields. SEA uses a cross disciplinary approach in their academic programs.

After a short time there, he moved to New Orleans with his family.

“I was living in New Orleans, I was very happy there with my family and I loved teaching, I always loved teaching and I knew I had a lot to learn about how to do it better,” Wells said. “So, I actually got a teaching certificate and I taught in high schools, inner city, high need schools in New Orleans for almost 3 years.”

During his time teaching in New Orleans, he became active in the community and sought to learn ways to use history to better the neighborhood and schools. In a sense, it was history as outreach.

Wells has used this idea here at UWF, too.

Just a year after arriving here in 2016 as a post-doctoral research fellow, Wells became an assistant professor in the history department.

For Wells, becoming a full-time professor seemed a “little unrealistic.”

“I always assumed I would go back,” Wells said, referring to his family’s mooring business back in Rhode Island.

By this time, they had sold the dive shop.

Wells feels lucky to have been given the opportunity to be a professor at UWF and he has become an active part of the Pensacola community, just as he did in New Orleans.

This past Summer, it was revealed that there was documented evidence of ties between Pensacola historian T.T. Wentworth, Jr., and the Ku Klux Klan during the 1920s. The Florida State History Museum, which is downtown and operated through the UWF Historic Trust, bears Wentworth’s name.

According to Wells, there are plans to hold meetings about the Wentworth documents to turn it into a dialogue in the community. He described it as an “exciting” process.

He intends to have UWF students work on the project as it continues.

“A big part of all my research is finding ways to involve students,” Wells said.

Wells’ desire to involve students led him to help establish the Digital History Lab in Building 50. The lab was created to fill a void within the humanities at UWF.

“The sciences have labs, Communications has labs,” Wells said, “everybody seems to have a lab but history, and the humanities more broadly, don’t really have one.”

Humanities students can use the lab’s resources, from digital audio recording equipment to data visualization software, to conduct and interpret research all in the same room.

Aside from Shipwrecked, Wells has another maritime related project being launched in December: the Gulf Coast History Project.

The project is designed to be like a clearinghouse for primary and secondary sources for those interested in the maritime history and heritage of this stretch of the Gulf of Mexico.

“I think we have one of the strongest collections of people doing that work,” Wells said, “and it will stand up to any university.”

For the project, Wells and the team worked with community partners and historical societies in the region to consolidate documents and resources.

According to Wells, these sources will be useful to a variety of researchers, from history to environmental science.

With the Wentworth documents and the Gulf Coast History Project, Wells has become somewhat of a public face for UWF’s history department and the work they have been doing in the community.

He has appeared numerous times on Gulf Stories Moments, a podcast from WUWF, the Pensacola NPR affiliate. On the podcast, he usually talks a little about his research into coastal and maritime subjects.

Although it has been a challenge for Wells to be more of a public figure, he feels it is something that must be done.

“While I might not be comfortable with it,” Wells said. “I’m doing the best I can because I think its really important that the word gets out.”

As stated earlier, Wells has a book coming out next month.

Shipwrecked started out as Wells’ dissertation for his Rhode Island master’s degree program. The book acts as an expansion of that dissertation and has been in the works for over a decade.

In the book, Wells argues that our coasts have a history that was founded on disaster and that the response and mitigation of disaster helped create the beach as we know it today. Shipwrecks, of course, play a key role in the book and in history.

The waters around Northwest Florida hold many shipwrecks, most notably the Spanish galleon San Juan, which brought Tristan De Luna and his crew to what is now Pensacola in 1559.

Despite being credited as the sole author of the book, Wells acknowledges all those who provided feedback and criticism to him.

“Although just my name is on the cover,” Wells said, “writing a book is a real collaborative effort.”

Even though Wells wrote a book with a great deal of historical analysis, he wanted the book to be accessible to people outside of just academics.

“I tried to write it in a way that its pretty narrative driven,” Wells said. “So that it would be engaging to read.”

Wells believes that the book could be used in an upper division history class.

Shipwrecked also happens to align with a class that Wells teaches every summer semester. The class deals with the history of the beach and tourism.

For Wells, finally getting his first book published means a lot.

“To see this thing take physical shape,” Wells said. “It is a very rewarding thing.”

Even though he is done with Shipwrecked, that does not mean that Wells is going to take a break. He already has his sights on his next project, a history of Pensacola and people who made significant impacts on Pensacola from the Civil War to now.

Part of what drives Wells is his passion for understanding and using history to better deal with the problems we face right here in Pensacola.

While Wells’ next project will not be complete for some time, he continues to try and find ways to engage both students and members of the community in the pursuit of history, our history.