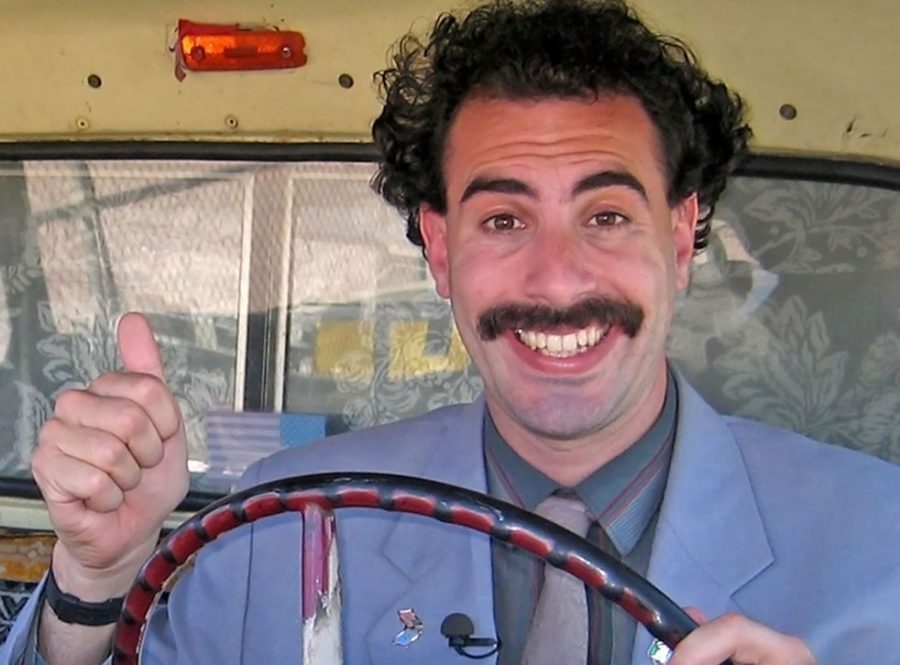 Sacha Baron Cohen is back, bringing us a sequel to the irresistibly hilarious and theatrically daring “Borat.” Fourteen years after Borat’s initial debut, you can expect the same style of humor with a twist of modern in all that is going on in 2020. Fair warning: this movie review may contain spoilers.

The film begins in Kazakhstan, where Borat has spent the last fourteen years of his life in a labor camp as a result of the hardships his film has caused to his country. He is summoned to report back to the United States to mend any tensions he may have caused between the two countries. Upon returning to his village before the trip, Borat discovers that he is the father of a teenaged girl named Tutar.

So what is Borat’s plan for solving these tensions? Gifting his newfound daughter to “Vice Premiere” Mike Pence, who he believes is the ultimate American stud, of course. If you’ve seen the first “Borat” film, you can probably imagine how miserably this fails. His failure brings great shame and probable execution to Borat and his country.

In an effort to keep himself alive, Borat resorts to any measure possible to fix his country’s relationship with America. This includes an attempt at “enhancing” his daughter to gain the attention of any political onlookers. This proposition does not go over well with Tutar.

At this point in the film, Tutar leaves her father’s side to pursue her dream of becoming a journalist. With nowhere to go, Borat finds solemn and sanctuary in the home of two very right-winged men, learning about American culture from their point of view. During this time, the coronavirus is beginning to plague the United States.

With his two new buds, Borat attends a political event that Tutar is scheduled to cover. As you can imagine, this event becomes conspiratorial in nature, but regardless, Borat makes amends with his daughter. Back on track with their original mission, the duo’s new goal is to conduct an interview with former New York City mayor and advisor to President Trump Rudy Guiliani.

I won’t go into extreme detail, but the interview with Guiliani is probably one of the most memorable parts of the film. Among other things, he coughs on camera and fails to social distance. The viewer can only assume the worst of Guiliani at this point in the film.

As a sort of a denouement, Borat realizes his love for his daughter and assures her that she can achieve anything she wants to in life. After all, the world is changing, as we can see that the once patriarchal society of Kazakhstan has become more feminist and equal upon Borat’s return. At the film’s end, we see father Borat and daughter Tutar working alongside one another to cover a new Kazakhstani event known as “The Running of the American.” This is the film’s one last jab at modern-day American politics.

According to IMDb, “Borat Subsequent Moviefilm” scored a 6.9/10 on a star-based rating system. This is only a few points behind the original “Borat” film, which scored a 7.3/10.

Despite how ridiculous or offensive “Borat Subsequent Moviefilm” may be, it’s underlying theme and message is to criticize the current state of the United States as satirically as possible. Much like the first “Borat” film, the newly released sequel can be seen as politically progressive to some. Cohen does a great job of illustrating these undertones without being too overbearing.

All in all, I recommend this film to anyone who is a fan of “Borat” or Sacha Baron Cohen.

Although satirical, crude and somewhat raunchy, “Borat Subsequent Moviefilm” is also heartwarming, progressive and down to earth. The film brings into question all that has happened in 2020 and focuses its perspective on what is being done to better American society.