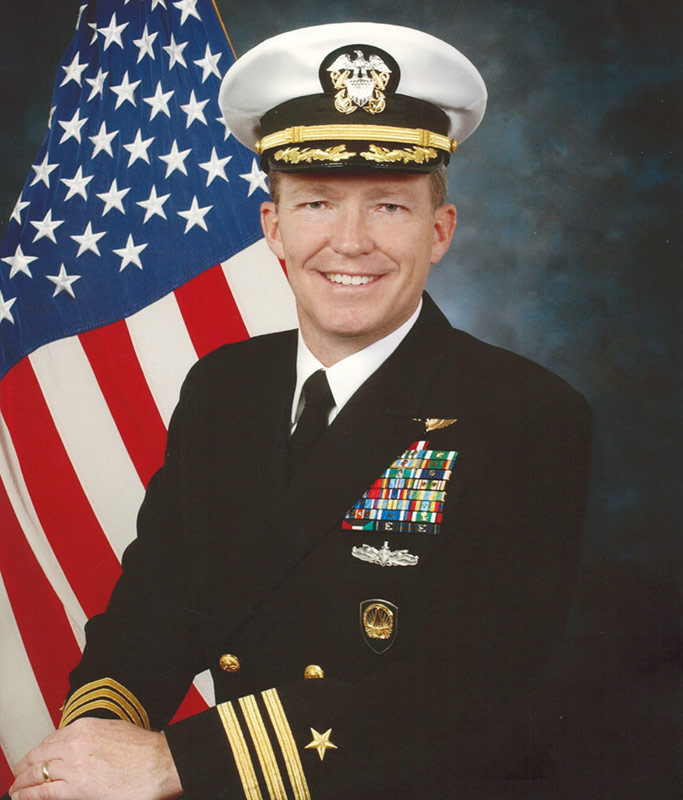 Phil Ehr is a U.S. Navy veteran who rose from Seaman to Commander during his 26-year active duty career who is now running for Congress as the Democratic candidate for Florida’s 1st Congressional District.

During his time in the Navy, Ehr flew reconnaissance missions in the Cold War and combat support in Desert Storm, among other accomplishments. He believes these and other staff assignments have helped him prepare for the job of congressman.

“I’ve always been service-minded before, during, and after the Navy and before running for office,” Ehr said. “I’ve always oriented to being around other people and doing things for the greater good.”

In pursuit of an officer’s commission, Ehr was sent to Pensacola in 1984 for Aviation Officer Candidates School, where he earned Wings of Gold. He later returned to Pensacola in 2017 to run for office.

“I recognized that the direction of our country was awful and that I needed to get involved,” Ehr said. “I saw what was happening with Donald J. Trump and I did not like it.”

One of Ehr’s primary goals of this election is to defeat current District One Congressman Matt Gaetz. Among other things, Ehr believes that people like Gaetz are pushing a foreign policy that is tearing apart past foreign policy accomplishments of the United States.

“We have had a long tradition in our country of having a bipartisan approach to foreign policy,” Ehr said. “As president Washington reminded us at his farewell speech, ‘our primary allegiance is to our country, not to party.’ All of those things are coming into play when I see the attack on what we accomplished in World War II, the Cold War and into the information age.”

While in the Navy, Ehr’s area of expertise was foreign policy. He also holds a Master of Science in International Relations from Troy State University.

“People like Matt Gaetz are articulating a foreign policy in a world view that is tearing apart the accomplishments that those generations have sacrificed for us, for our freedoms and for our prosperity,” Ehr said. “I’m not going to just stand by it and let it happen. Duty compelled me to run for office when I saw that nobody else was going about it in a way that I thought would be successful.”

Aside from Albert Oram, who is running as an independent, Ehr is the only challenger against Gaetz. Ehr won the Democratic nomination for Congress in District One.

“I’m proud to be the Democratic nominee in a time when the Republican party, I think, has sold out,” Ehr said. “We are fighting, as Joe Biden says, for the ‘soul of our nation.’”

Ehr believes that he is an independent thinker and promises not to put party over country if elected to Congress. He feels that he does not owe either political party any future votes or favors.

“I will work with the president, whoever he may be, when he is right, and I will stand up to him when he is wrong,” Ehr said. “That is different from what Matt Gaetz does on our behalf.”

Ehr credits much of his experience and current political success to his days in the Navy. He believes that these experiences will make him stand out against the incumbent.

“You don’t succeed in the military service without knowing your job,” Ehr said. “The job of a member of the military is to execute your mission while knowing your function and skills to accomplish the mission, and to take care of people in your charge. That basic of leadership
translates directly into representation in Congress.”

Ehr’s experiences in the Navy have taught him the importance of working with others despite their political beliefs. He believes that the nonpartisan approach he takes will make him successful and stand out against other members of Congress.

“In the Navy, teamwork and the ability to strip away much of the hyper-partisan rhetoric is something that military people, including myself, do naturally,” Ehr said. “That’s how we grew up, that’s how we were trained, and that’s what I would do in Congress.”

Ehr feels that members of Congress who have served in the military work harder to bring this country together. Although he believes that this is not the case for all non-veterans in Congress, he acquaints this observation most prominently to Congressman Gaetz.

If elected, after getting a handle on COVID-19, Ehr hopes to first address job growth and infrastructure in northwest Florida. He has seen a lack of adequate infrastructure and believes that Congress’s recently passed infrastructure bill will address this issue in the community.

“The infrastructure bill is necessary and is an opportunity to invest in forward-looking technologies and infrastructure so that we here in northwest Florida can have a better and greener production of energy,” Ehr said. “These bring good jobs and trades that should be an attractive prospect for graduates.”

Ehr has also noticed that many people who have lived in northwest Florida leave the area to seek better job opportunities. He hopes to revive the job market and create new opportunities that keep families here.

Aside from job growth, Ehr hopes to address and fix several other issues in our community. One such issue includes correcting failing environmental policies.

“I want to make sure that we reassert American leadership in global discussions, and that means rejoining the Paris Climate Accord,” Ehr said. “I want to work toward a net-zero by 2050 and work with the administration to help with public policy that encourages things like solar panels and electric cars and the infrastructure to go along with that.”

Ehr also advocates improving race relations in northwest Florida through conversations with the community. Topics from these discussions include community police reform.

“We have national talent and local talent here so that we can improve our police departments and sheriff departments,” Ehr said. “Not everyone is on board with these kinds of discussions, but they are beginning. I want to be a congressman that participates in these and encourages everybody to work together in common unity to reduce racist response and profiling that have caused so much trouble and heartache for so many people.”

Since his return to Pensacola in 2017, Ehr’s goal has been to fix what he believes is a misrepresentation of the people of northwest Florida.

“Our representation is broken,” Ehr said. “Matt Gaetz is decoupled from the people here and is only adding to the distortions, distractions and lies that hurt us.”

Ehr hopes to confront and challenge the missteps that he believes Gaetz has added to the community. These missteps include aiding in financial policies that widen the gap between the rich and the poor, ignoring the risks surrounding offshore oil drilling, and cutting the Affordable Care Act without an appropriate replacement.

“What Matt Gaetz has done is that he has lost touch with the people here,” Ehr said. “He’s not focused on the opportunities and the problems that we have in our district.”

Since running, Ehr has built trust within the community. He has received numerous endorsements from labor unions, civil rights groups and veteran organizations from across the nation.

“We are the little campaign that has grown into a big campaign because of our message and the credibility of our slogan: Forward with Honor,” Ehr said. “This is a stark contrast to the incumbent.”

According to internal polls of likely general election voters throughout the district, 91% of Democrats support Phil Ehr and his run for Congress. Likewise, 26% of Republicans say that they will not vote for Matt Gaetz.

Ehr is confident in his campaigning abilities and is determined for Election Day.

“Just like when you go into a military mission, we are full throttle all the way through November 3,” Ehr said. “We’ve got everything working right in our campaign right now, and we are realistic in knowing that it is an uphill battle.”

With Election Day almost upon us, Ehr hopes that he will be able to serve his community. He cares deeply about the people of northwest Florida and will do everything in his power to improve the lives of those on the Emerald Coast.

“We in the military services all orient our lives on an honor code,” Ehr said. “That honor code is that I will not lie, cheat, or steal, nor tolerate those among us who do. If you look at Mr. Gaetz’s behavior, you’ll see that he does tolerate lies and that he does distort and distract with
falsehoods.”

For more information about Phil Ehr and his run for Congress, please visit his website www.ehrforcongress.com.