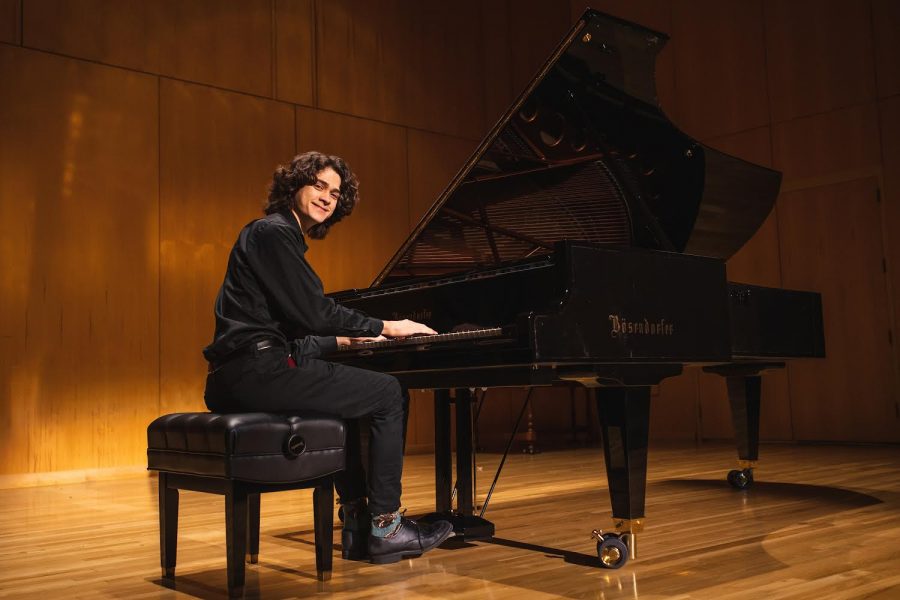 Since 2020, the UWF Music Department has accumulated a generous donation totaling over $8.5 million.

The recent gift that put the department over the top was made by Dr. Herman Rolfs before his passing in August 2020. Herman purchased an Imperial Bösendorfer piano as a way to help UWF’s music students in need and commemorate his late wife, Valerie, who died in November 2019.

Because of this donation, UWF joins an elite organization of universities and conservatories in the nation with an Imperial Bösendorfer piano.

Dr. Sheila Dunn is the associate professor and chair of the music department.

“Imperial Bösendorfers are very rare and elite because of their incredible handmade craftsmanship,” she said. “The warmth and beauty of tone is sublime, and our students enjoy performing on the piano in the newly named Rolfs Music Hall.”

According to a UWF Newsroom article from Sept. 8, the donation from the Rolfs’ estate will provide significant annual scholarships and resources for music students.

Herman and Valerie had successful careers in the medical field; however, their shared love of classical music and belief in access to education inspired their gift and the legacy they would leave behind. Together, the Rolfs’ loved collecting music albums, attending classical music concerts and organizing musical performances for their family, friends and church.

Both Herman and Valerie benefitted from scholarships when they were in school, so they wanted to afford the same opportunities to a new generation of college students.

“This incredibly generous gift will allow every music student at UWF to have access to scholarship support,” UWF President Martha D. Saunders said in the Sep 8 UWF Newsroom article. “The impact of their gift and their legacy will be revealed for years to come through the very best music education for our students.”

In honor of Herman and Valerie, the music hall in the UWF Center for Fine and Performing Arts has been renamed the Rolfs Music Hall.

“The naming of the hall after the Rolfs’ is a beautiful tribute to their shared love of music,” said Dr. Dunn. “I am overjoyed that their remarkable legacy will live on through the music that is made in the hall on a daily basis and by generations of music students to come.”

The other part of the donation honored Dr. Grier Williams, the first chair of UWF’s music department. According to the UWF Newsroom article, the anonymous gift to rename the UWF Music Department to the Dr. Grier Williams School of Music will establish a needs-based scholarship endowment for music students and members of the Argo Athletic Band.

The remaining funds from this gift will allow the school to establish a symphony orchestra, an opera program, a piano series and a graduate program.

“The generosity of Herman and Valerie Rolfs has put the UWF Dr. Grier Williams School of Music on the map for studies in music performance, music education and music paired with an outside field,” said Dr. Dunn. “The notoriety and prestige that comes with being a named school of music is very exciting, and it is a great honor to be named after the first chair of our program.”